Something to Talk about by Meryl Wilsner 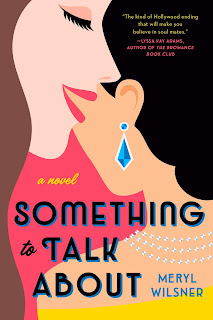 Today, Jo made her feel safe and warm and cared for, and that was how Jo had made her feel for months now. Emma was finally read to admit it, was finally able to see it. She wondered what her life would be like without the rumors.

Jo is a former child star, now a successful writer and producer. Emma is her competent, empathetic assistant. When the tabloids declare them a couple, both Emma and Jo find themselves microscopically analyzing everything they do around each other and in the process, realize they'd had/have massive crushes on each other. It's a serious slow burn workplace romance.

Something to Talk About by Meryl Wilsner
Berkley Books, 2020
Digital ARC from publisher

Sadly, I didn't love this debut as much as I wanted to; I thought it wouldn't be an issue but I actually ended up being really squicked out by the supervisor-employee relationship with the two leads. Even though Wilsner is conscientious to address that element multiple times in the book, I really couldn't overcome that hurdle. (Totally a personal thing; Wilsner really works hard to address that and make sure that Emma, as the employee, has a lot of agency and doesn't have her work compromised because Jo's feelings toward her.)

Frustratingly, despite the slow pace, I actually didn't feel like I got to know either Jo or Emma very well. There's a sexual harassment plot thread (separate from what might or not have happened with Jo and Emma) that takes up a good deal of story space as well as a rather mundane conflict that felt a little overdrawn to me. When Emma and Jo finally do get together, I was grinning and really loving it, and I wished that connection had happened sooner. Despite flipping between Jo's and Emma's POVs, I still found there was some distance between me and them that made it hard to get all swoony about their eventually getting together.

I suppose there's some realism in how the relationship shakes out: it's inelegant at times, if not downright awkward. I don't mind some awkward in my romances but the awkwardness combined with a few situations in which Jo, as the supervisor, leverages her greater prestige/power in cruel and hurtful ways, left an unpleasant taste in my mouth. Other readers are less bothered by it, so this is definitely a case of being the wrong reader for this book.

There is a sex scene, and it's sweet and hot. I get why it happened when it did, and it couldn't have happened earlier, but Jo and Emma openly together was really enjoyable and I would have liked it sooner. I know, it's impossible to please me!

Refreshingly, there's some diversity in the story that isn't simple window-dressing: Jo is Chinese-American; Emma is Jewish and suffers from asthma. How they interact with the world is impacted by their backgrounds and circumstances, exacerbated by the imbalance of power and money.

Enough in this book was good that even though I wasn't in love with this story, I'm going to be watching for Wilsner's future releases. And more lesbian romances, please and thank you!
* book reviews book rating - okay