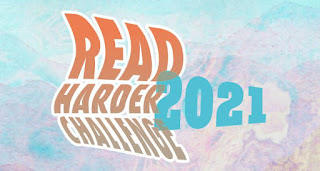 Book Riot's Read Harder challenge rocked my world when I did it in 2019, and it lead to some of the most interesting reads for my 2020 (although I didn't come close to completing). Really excited to try to crush the challenge this year!

Read a book you’ve been intimidated to read

Read a nonfiction book about anti-racism

Read a non-European novel in translation

Read a genre novel by an Indigenous, First Nations, or Native American author

Read a romance by a trans or nonbinary author

Read an SFF anthology edited by a person of color

Read a food memoir by an author of color

Read a work of investigative nonfiction by an author of color

Read a book with a cover you don’t like

Read a realistic YA book not set in the U.S., UK, or Canada

Read a memoir by a Latinx author

Read an own voices book about disability

Read a historical fiction with a POC or LGBTQ+ protagonist

Read a book of nature poems

Read a book set in the Midwest

Read a book that demystifies a common mental illness