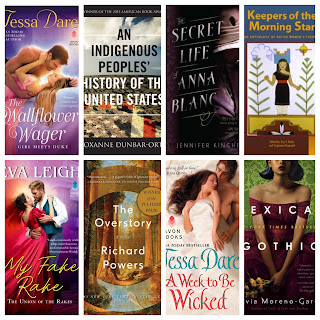 In a year of erratic, inconsistent reading, I was lucky that most of what I read was pretty much awesome. Books had to compete against a great deal of stress, anxiety, and distraction -- and these eight reads really captured me this year.

You'll see most provided deep escapism -- romances were the genre of the year, no question -- but others stretched me and educated me.

I think Tessa Dare might be the author of the year for me: I read thirteen of her books, and three of them at least twice, if not three times this year. This one I probably read about five times, to be honest, because it was sexy and fun and deliciously escapist.

Tessa Dare, A Week to Be Wicked

The second book in Dare's Spindle Cove series, this was my very favorite of the five books. I loved both characters, I loved their romance, and I especially loved the resolution to their conflict. It helps that I love the entire Spindle Cove universe, and so the details of all the side/secondary characters was enjoyable, too.

Roxanne Dunbar-Ortiz, An Indigenous Peoples' History of the United States

I actually double fisted this one, so to speak: I listened to the original edition and read the Young Adult edition. Both were fabulous and incredibly eye-opening and illuminating. Much of the history was new to me, but even more shocking was the way our current military has drawn from, and continues to draw from, our treatment of Indigenous peoples. I will not forget this book soon.

I reviewed the audiobook of this and both the story itself by Kincheloe and the narration by Moira Quirk are fantastic. I ended up inhaling the other two Anna Blanc books and I am d-y-i-n-g for the fourth. Our heroine Anna is so effing adorable/clever and her determination for professional satisfaction is admirable, especially since women weren't given much professional freedom in 1907.

Apparently the three books in Leigh's series, The Union of Rakes, are each based on or inspired by classic '80s movies. I immediately 'got' the opening flashback in this one, which pays direct homage to The Breakfast Club, but couldn't say which movie this one was connected to, and thankfully, that doesn't matter. I've mixed opinions on transformation-of-self as a plot device, especially in romance, but Leigh does it well -- there's more than one conversation about why our hero wasn't enough for our heroine before his rakish transformation, and I love me some real conversations in my romances.

As I said in my review, this book has the vibe of I Am the Pretty Thing That Lives in the House meets Lovecraft Country (the book, not the show) with a dash of Grace Kelly-in-a-Hitchcock-thriller. It's a perfect read full of mystery and mood, and I could not put it down.

As I said in my review, I fully anticipated hated this book and damn if I wasn't wrong. From the first handful of pages, I was swept up into this story of ecology, revolution, and change. I've recommended it over and over for its mix of plot, character, and moral arc.

I picked this play for Read Harder 2020 (6: Read a play by an author of color and/or queer author), which I found in Keepers of the Morning Star: An Anthology of Native Women's Theater, edited by Jaye T. Darby and Stephanie Fitzgerald. As with the Read Harder challenge, I'm not sure I would have necessarily read this play but ohemgee, I am so glad I did. Jack, a Native man who wasn't raised with a connection to his community, desires to learn more about his culture; at the same time, he's visited by the spectre of Frances Densmore, a 20th century 'ethnologist' who worked to 'preserve' Indigenous culture. (Which wouldn't need preserving, of course, if US white supremacy culture wasn't so keen to eradicate Indigenous communities.) A beautiful piece I would love to see performed, and a fab parallel read with Dunbar-Ortiz's book.